Lake Profile
Lake Denoon is a 162-acre lake in the southwestern portion of the City and is also partially located in the Town of Norway. The lake has a glacially formed kettle basin that reaches a maximum depth of 55 feet with bottom substrates varying from sands and gravel to muck. An outlet stream on the south end drains to Ke-Nong-Go-Mong (Long) Lake in Racine County. A cattail island and an extent of cattail shoreline are found on the lake's west end. The remaining lakeshore is mostly developed with residential housing.

History
Completed in summer of 1985.  Denoon is named after a dynamic early Muskego settler who published the first Norwegian newspaper in the United States and was influential in shaping the Wisconsin Constitution. His name was James Denoon Reymert.

Features
The Denoon Park, besides hosting the public launch for the lake, is also a 53-acre park that has an open air shelter, picnic tables, playgrounds, soccer and baseball fields, snowmobile trails, a walking trail, and portable restrooms. 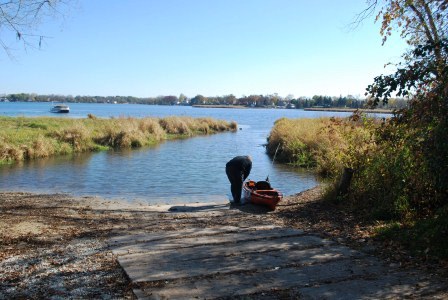