Ospreys, sometimes known as “fish hawks,” are raptors skilled at grabbing fish from the water.  Ospreys are relatively rare in southeast Wisconsin. They were formerly endangered in much of the country but their recovery since the discontinued use of organochlorine pesticides like DDT is a conservation success story. Ospreys can be year-round residents in the southern US but those that nest here or further north spend their winters near the equator.

Following the restoration of Big Muskego Lake in 1997, an Osprey translocation project was implemented to reintroduce the species to the area.  Ospreys began successfully nesting here in 2005, fledging one young. Since then, there has been an osprey nest on the lake every year since.  2020 marked the first time that Big Muskego hosted two osprey nests.

The Ospreys returned to Muskego and nested in late March of 2021.  Two nesting pairs have returned to Big Muskego Lake’s osprey platforms and are making their way fishing the lakes.  The first pair of Ospreys laid their first egg of 2021 on April 7th, laid their second on April 10th, and their third on April 14th.  As of May 18th, all three eggs have hatched!   Due to technical difficulties we have only recently been able to reestablish connection with their camera and where surprised to find that the second pair have 4 eggs in their clutch, and all 4 have safely hatched as of May 31st!

The young on the south platform first fledged on July 21st, with all the young being seen out of the nest throughout the day. 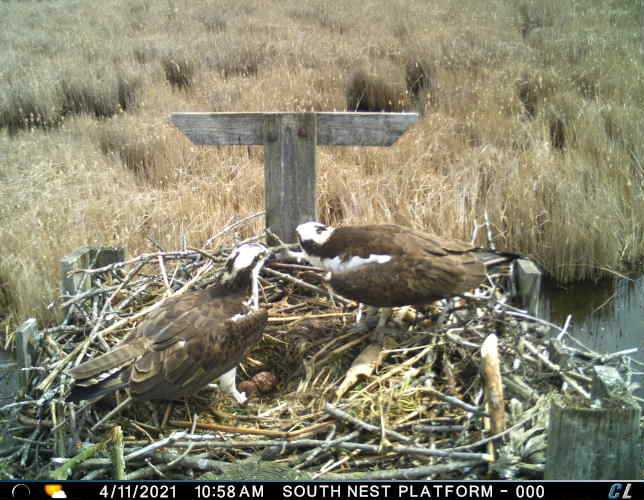 Bald Eagles began nesting in Muskego in 2007 in a large cottonwood tree in a remote area on the southwest side of the Big Muskego Lake.  They successfully produced young in most years until a storm brought down the nest tree in 2017.  Beginning in 2018, rather than building a nest in another tree, they took over the Osprey nest in one of the five constructed nesting platforms along the western shore.  (Note: when the Ospreys migrated back that year they successfully nested on a different platform).  A camera was previously affixed to this platform to capture Osprey nesting activity however it had become inoperable.  Replacement cameras were installed but the Eagles had already began nesting in a tree.  They still use the platform as a perch intermittently, and are seen fishing regularly. Other wildlife use the platform regularly as well, including the local ospreys.

Bald eagles usually do not migrate great distances and often gather in favorable over-wintering areas near open water of large rivers where they find food.  They feed primarily on fish but also feed on other birds and mammals.  Bald Eagles are opportunistic feeders and often steal food from Ospreys and other carnivores and will also eat dead animals they encounter.